Another Shot at Life

Published by Riverview Health on February 9, 2021

Standing atop the bleachers in the Tipton High School gymnasium, Randy Bagley gazes down the steps and grins as he breathes a sigh of triumph. A few years ago, something as simple as climbing stairs without running out of breath would have felt close to impossible for Randy. In fact, he nearly had coaches call 9-1-1 after he walked up two flights of gym stairs and felt faint and had a pain in his chest. But he didn’t. 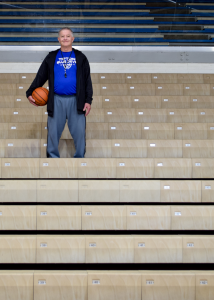 Instead, Randy, a Tipton High School varsity assistant boys basketball coach, started getting dropped off on the other end of the building just so he could use the elevator and avoid climbing stairs.

“The other coaches could tell something was wrong,” Randy remembered. “If I went up one flight of steps, I’d have to stop at the top to let the pain go away and catch my breath.”

Chalking the chest pain and breathlessness up to aging and being a bit overweight, Randy maintained his active lifestyle of coaching, golfing and playing on a recreational softball league.

During softball games, a younger, faster teammate would often run the bases for Randy after he hit, but sometimes Randy would have to run the bases himself. He thought about telling his teammates about the chest tightness he felt during running. But he didn’t.

On some pleasant evenings, Randy and his wife would go for a walk, and he would experience chest discomfort and wonder if he should say something to a doctor. But he didn’t.

“I hadn’t been to a doctor in nine or 10 years,” Randy said. “There were so many signs, and I just blew them all off or said I’d get to it later.”

It wasn’t until January 2019, after his wife gave him a $49 heart scan as a Christmas gift, that Randy’s heart finally got the attention it needed—and it saved his life.

After putting it off for a couple weeks, Randy visited Riverview Health for a calcium scoring CT scan, also known as a heart scan. A heart scan is performed using a CT scanner to determine the amount of hardened plaque inside the coronary arteries. Plaque build-up inside the coronary arteries can lead to a heart attack if the flow of oxygen-rich blood to the heart is reduced or blocked.

Randy’s results revealed his heart was a ticking time bomb for a heart attack. A normal range for a man of Randy’s age is a score between 50 and 100, according to Bruce Schilt, MD, a cardiologist at Riverview Health. Randy’s score was 3,212.

“His calcium score was incredibly high, and the higher the number, the greater the risk for coronary artery disease,” Dr. Schilt said. “Numbers above 450 or 500 show a patient is at the same risk level as someone who has already had a heart attack.”

After his heart scan, Randy participated in a heart stress test at Riverview Health to get more information about the performance of his heart.

“The nurses and technologists saw something alarming and stopped me in the middle of my stress test and grabbed Dr. Schilt,” Randy said. “Dr. Schilt was very concerned and sat down with me to explain I needed a heart catheterization procedure immediately. Dr. Schilt made me feel comfortable from the get-go. He told me what he was going to do, and he was very informative in telling me what my issues and options were.”

In the cath lab at Riverview Health, Dr. Schilt found that Randy had several blockages that ranged from 50 to 90 percent blocked.

“Had he not come in for a heart scan or stress test, he probably would have had a massive heart attack and most likely died,” Dr. Schilt recalled. “It’s pretty remarkable. This is an example of the system working—a concerned wife, the patient getting a heart scan, expert nurses and techs, and a cardiologist who can care for him in the cath lab that same day.”

After the heart catheterization was done to determine the extent of his disease, Randy had quadruple bypass surgery and woke up feeling like a new man.

“It was absolutely unbelievable how much better I felt immediately upon waking up from surgery,” Randy said. “I think most people are shocked when I tell them I had open-heart surgery. If you didn’t see the scar on my chest, you’d never know. The scar is like a badge—it means you’re living.”

Since surgery, Randy has lost more than 40 pounds and is lifting weights, eating healthier and controlling his food portions. He’s also doing more physically than he had been able to do in years, such as enjoying walking during golf instead of riding in a cart.

“I knew I needed to come in, but I was in denial,” Randy said. “Now, I tell everyone I know to get a heart scan because it’s painless and it saved my life. It’ll save others, and for those who don’t have an issue, it’ll give them peace of mind.”

After recovering, Randy couldn’t wait to get back to coaching basketball.

“It’s a passion and a purpose. Having basketball helped me because it gave me a reason to get better,” Randy mused. “Before the surgery, I was doing stuff that could have killed me. I’ve learned there’s no reason to have a heart attack before you get serious about your heart health.”