Published by Riverview Health on September 10, 2015 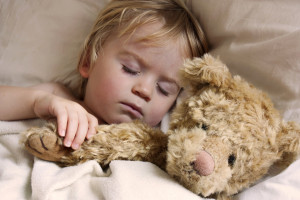 “How much sleep does my child need?”

It’s no surprise this important question is one of the most common ones brought up at pediatric office visits. With the fast-paced world we live in today and sleep becoming something we tend to give up as adults, it’s crucial for parents to set the right tone with their kids early to help establish good sleep habits later. As babies become toddlers and then grow into active kids, the recommended amount of sleep changes. So where do you start?

At this stage, newborns tend to sleep a lot, so I gear my advice toward the lack of sleep parents receive. Most new parents feel as if they’ll never sleep again because their newborn’s schedule doesn’t really coincide with theirs. Newborns need to eat at least once every three hours and even more often in some cases. My best advice to new parents is the same advice I took in residency, sleep and eat when you can. Your baby will get on a schedule soon, but the first few weeks are all about gaining weight and bonding, so hang in there.

Parents begin to emerge from the blur of sleeplessness and constant diaper changes. I usually tell parents that finding a nice routine is helpful to them and their baby. It can be as simple as sleep, eat, play time—repeat. This will usually cycle every three to four hours. Most babies at this age can do one four- to five-hour stretch of sleep. Hopefully, by this time, they’ve figured out to do this at night. If your baby is fighting this, I suggest waking them to feed during the day, keeping the lights on and shades open. Then, at night, keep things quiet and the lights low.

Most babies are still on the sleep, eat, play time routine and are capable of one good five- to six-hour sleep stretch. It’s okay if the nap times aren’t on a strict schedule just yet. The play time after eating should be anywhere from 45 to 90 minutes and two hours at the most. If you miss the “I’m ready to go back to sleep” window, you often have a fussy, hyper-alert baby who will fight sleep.

You should begin to notice daytime sleep forming into a nap schedule. Again, the awake time in-between naps should be no more than two hours. If your four-month-old child is more than 14 pounds, he or she is capable of sleeping 12 hours at night, but most babies still want one feeding in the middle of the night.

At six months, the sleep requirements are about the same. Most babies sleep 10 to 12 hours at night and have three naps, at least one hour long during the day. Naps less than 45 minutes are not considered restorative. The other interesting trend you’ll see at this age is a shifting to earlier bedtimes. Many parents will keep their babies up longer thinking they’ll sleep in later. Speaking from experience, no matter what time babies go to sleep, they don’t tend to wake up later. It’s counterintuitive, but the earlier you put a baby to bed, within reason, the longer and better they sleep. So if your baby is waking up frequently through the night, try shifting the bedtime to an earlier hour. You may be pleasantly surprised.

Around nine months, most babies are sleeping 10 to 12 hours at night and taking two naps, one to two hours long. It’s a hard time for stay-at-home moms because it seems just when you get everything ready to go to the grocery or to run errands, it’s time for the next nap. It can be tempting to just tote your baby along with you, but protecting those naps is actually really important for your baby’s development. This continues until about 15 months old when they drop the morning nap.

Most toddlers 15 months to three years old sleep through the night, which should be 10 to 12 hours long, and take one afternoon nap.

Older kids through the teen years

By four or five years old, most kids drop the afternoon nap as long as they’re getting at least 10 to 12 hours of sleep at night.

During elementary school, I suggest nine to 10 hours of sleep until age nine or 10. By junior high, eight to nine hours are usually needed. By the time high school age comes around, I recommend eight hours of sleep if possible. Sports and homework can make this hard, but it’s a goal that should be targeted.

I’ve found as a pediatrician and parent the quality and quantity of sleep children get can affect every area of their lives. That said, sleep is only part of your child’s whole health and well-being. To ensure your children are happy and healthy, we encourage parents to discuss other topics at pediatric visits, including school performance, social and emotional development, nutrition and physical growth.

Learn more about our pediatric services, locations and board certified doctors online.