Artificial sweeteners – are they safe?

Published by Riverview Health on November 13, 2012 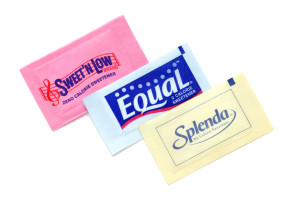 In grocery stores, artificially sweetened products are everywhere! In an effort to “improve their nutritional profile”, beverages, yogurt, cereals, cookies, chips and even boxed entrees are utilizing artificial sweeteners instead of sugar. Artificial sweeteners are designed to mimic the sweetness of sugar with fewer calories due to volume reduction and inadequate absorption.

While the FDA has approved the use of artificial sweeteners, many consumers and experts still question the safety of these products.  The acceptable daily intake (ADI) levels have been established by the FDA and are defined as the amount that can be consumed over a lifetime that will not result in injury. However, there are certainly individuals who experience intolerance symptoms and suffer negative side effects including headaches, vision problems, rashes, stomach upset and pain from consumption.Read on to learn more about the most common artificial sweeteners.

Aspartame (Equal®): Aspartame is approximately 180 times sweeter than sugar.  It is used in many commercial products including diet beverages, sugar-free gelatin and pudding mix.  The ADI is 97.4 packets a day* (50mg/kg body weight).  Each packet is equal to the sweetness of 2 teaspoons of sugar.  Aspartame should not be used for cooking as it is not heat stable and will lose its sweetness.

Saccharin (Sweet’N Low®):  Discovered in 1879, saccharin is one of the very first artificial sweeteners and is 300 times sweeter than sugar.  Unlike aspartame, saccharin is heat stable but its bitterness may be enhanced when heated.  The ADI is 28.4 packets a day* (15mg/kg body weight).  Keep in mind that saccharin may not be ideal for pregnant women since it can cross over the placental barrier.

Sucralose (Splenda®): Sucralose is derived from sugar but then processed so the body does not recognize it as sugar; therefore, the calories are not absorbed.  The ADI is 28.6 packets a day* (5mg/kg body weight).  Like saccharin, sucralose is heat stable and good for baking and cooking.  When used for baking, keep in mind sucralose will not add bulk to the recipe; just sweetness.  Each packet of Splenda® is equivalent to 2 teaspoons of sugar.

Stevia products (SweetLeaf® Sweetener™/Truvia™): Both products are made from the stevia herb which is currently grown in Brazil, Japan, China, Colombia, Mexico and India.  SweetLeaf™ only contains stevia while Truvia™ is a blend of stevia and a sugar alcohol.  Stevia is 30 times sweeter than sugar when unprocessed and 250-300 times sweeter once purified.  Stevia sweeteners contain zero calories and can be used for cooking and baking.  Truvia™ cooking conversion for a recipe is ¾ teaspoon for every 2 teaspoons of sugar.

Xylitol: A naturally occurring sugar alcohol found in many foods, including beets, mushrooms, oats, berries and corn but produced commercially from birch and other hardwood trees.  Xylitol tastes as sweet as sugar but contains 40% less calories.  In addition, xylitol does not cause increased blood sugar because it is absorbed slowly.  Unfortunately, large amounts of xylitol consumption can result in abdominal discomfort, gas and diarrhea.

Agave nectar: Produced from desert plants this liquid sweetener actually contains slightly more calories per teaspoon than sugar (5 calories more per teaspoon).  However, since it is significantly sweeter than sugar, you can use about 75% less volume when using agave nectar to get the same sweetness as sugar. Agave nectar is ideal for beverages and as a substitute for cane syrup, maple syrup, inverted sugar, or molasses in any recipe. Agave nectar is considered safe for normal consumption, but the high-fructose content may be concerning as there may be a link between increased consumption of fructose and increased risk of obesity.

*Note: The acceptable daily intake (ADI) examples are based on a 150-pound person.

Posted in Uncategorized
← Previous Next →