Understanding your risk for type 2 diabetes

Published by Riverview Health on March 27, 2013 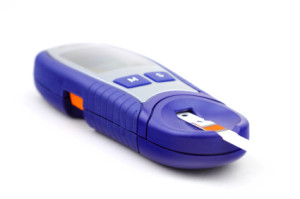 “Take care of yourself and stay healthy.” It’s something we’ve all heard our friends, family or doctor say at some point in our life. But for some of us, it’s easier said than done. For example, imagine having to count every calorie, carbohydrate, protein and fat gram you eat at every meal, every day. And imagine having to prick your finger—or some other part of your body—three, four, five, even six times a day to make sure your blood sugar isn’t too high or too low. Even worse, think about a child being told he or she can’t play with friends until after he or she injects insulin.

This is the reality for nearly 26 million Americans who suffer from diabetes. And more than a quarter of those with the disease—nearly seven million—are undiagnosed and don’t know they’re at a high risk for developing diabetes. An additional 79 million people—or one in three American adults—have pre-diabetes, which puts them at a higher risk for developing type 2 diabetes.

In type 2 diabetes, the most common form of diabetes, the body does not produce enough insulin or the cells ignore the insulin. Insulin is necessary for the body to be able to use glucose for energy. When you eat food, the body breaks down all of the sugars and starches into glucose, which is the basic fuel for the cells in the body. Insulin takes the sugar from the blood into the cells. However, complications can arise when glucose builds up in the blood instead of going into the cells.

Unfortunately, a diagnosis often comes seven to 10 years after the onset of the disease—long after disabling and even deadly complications have had time to develop. Therefore, the early diagnosis of diabetes is critical to delaying or preventing complications, such as heart disease, blindness, kidney disease, stroke, amputation and death.

It’s important for everyone to know the risk factors for type 2 diabetes, which include being:

Ethnicity can also play a factor. African Americans, Hispanics/Latinos, Native Americans, Asian Americans and Pacific Islanders face an increased risk of developing diabetes. And people who have a family history of the disease also have a higher risk.

The good news is you’re in the driver’s seat. In most cases, you have the ability to control the disease rather than let it control you. Studies have shown type 2 diabetes can often be prevented or delayed by losing just seven percent of body weight through regular physical activity (30 minutes a day, five days a week) and healthy eating. By understanding the risks, you can take the necessary steps to prevent the onset of type 2 diabetes.

Find out if you’re at risk for diabetes by taking this test, provided by the American Diabetes Association.