A Simple Scan Can Save a Life

Published by Riverview Health on August 30, 2019 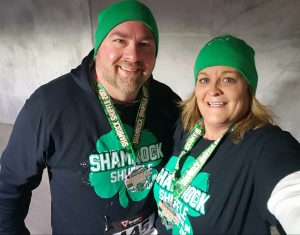 Laura and Jack Everling made a plan to get a heart scan together when they both turned 50. They both had a family history of heart problems, so they thought it was best to err on the side of caution. They never dreamed the scans would turn into a lifesaving decision.

The heart scans were the only thing standing between Laura and Jack’s spring break trip to Florida, so they were anxious to get them over with. As planned, they completed their scans and then took off for some sun and beach time. However, while in Florida, the Everlings received a call from their primary care physician, Dr. Jeremy Fisk.

“Dr. Fisk recommended that Jack go back in and have an echocardiogram done,” Laura recalls. “So, when we got back from our trip, Jack went to Riverview Health a second time and saw Dr. Pyles.”

On May 23, 2019, Jack came in for his heart catheterization. After the procedure, Dr. Pyles told the Everlings that Jack had four blockages in his arteries—three of which were 100 percent blocked.

“Dr. Pyles told me that the only thing that could fix the blockages was heart surgery,” Jack said.

Jack didn’t waste time and made an appointment for quadruple bypass surgery.

“The surgery went extremely well,” Jack said. “I was sore coming home from the hospital and recovery was a little rough at first, but after the first week at home I was able to get up and do things for myself.”

Jack started cardiac rehabilitation in July 2019 and is still working toward a full recovery. He does, however, already feel the positive effects from his surgery.

“I never knew what it felt like to feel good,” Jack said. “I couldn’t believe it when Dr. Pyles told me that my arteries had probably been in this condition for almost 20 years.”

Laura and Jack both enjoy walking in 5K races and were shocked that he hadn’t noticed any major symptoms like chest pain during any of the walks they participated in.

“Toward the end of the 3.1 mile walk he would usually have to stop for a second or slow down due to shortness of breath, but blamed it on his age and weight,” Laura said.

Laura and Jack never thought his heart was in such poor condition but are thankful they were able to detect and resolve the issue. Their positive outcome since Jack’s surgery has led them to urge their friends and family members to get a heart scan as well.

“We can’t say enough about how important a heart scan can be,” Jack said. “A painless, ten-minute-long scan saved my life, and I want others to know what it’s like to finally feel healthy after so many years.”

The Everlings are excited to get back to walking their 5Ks and are thankful that this time they will be able to complete one together without having to stop to take a breath.

Posted in Heart and Vascular Health
← Previous Next →