When the ‘Baby Blues’ Happen to You

Published by Riverview Health on September 1, 2017

During pregnancy and the first few weeks of a baby’s life, moms often hear things like “being a mom is the greatest.” Then, there are the pictures all over social media—smiling babies and moms who make motherhood look like a breeze. 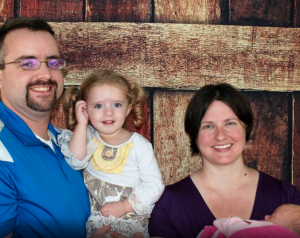 For those who don’t think they quite match up to these ideals and images, it can feel like failure. Throw in the hormonal imbalance that’s common after birth, and it becomes the perfect storm for postpartum depression.

The responsibility of taking care of a new baby and expectation of keeping it all together can leave moms feeling as if they have nowhere to turn. But the Riverview Health Postpartum Anxiety and Depression support group provides a supportive, understanding and non-judgmental environment where women can encourage and help each other adjust to the changes in their lives. Riverview Health Maternity Center counselor Kristy McNamee says in addition to the connection moms make, the support group provides coping skills, education on self-care and thought-changing exercises.

Ashley Hatton knows the true value of this support group. She welcomed her sweet baby girl, Emilia, on Jan. 20, 2017. With her older daughter nearly 2-and-a-half years old, Ashley considered herself a seasoned mom at this point. She even experienced “baby blues” the first time around and felt prepared. So when the lactation consultant informed her about the Postpartum Anxiety and Depression support group, Ashley didn’t think she would need it.

Due to some minor health complications with the new baby, Ashley began to feel some anxiety before even leaving the hospital. From there, just like a downward spiral, postpartum depression began to take over.

“I was one week postpartum and the baby wasn’t sleeping, so I wasn’t sleeping,” Ashley said. “I was miserable and felt as if I was making everyone around me miserable. I had never experienced this low point before and I began to think that the kids would be better off without me. That’s when my sister urged me to seek help.”

Initially, Ashley sought help through a mental health program and was able to speak to a counselor.

“The first step was tough since it felt like you’re admitting you have a problem,” Ashley recalled.

It wasn’t until Ashley finally decided to try out the Riverview Health Postpartum Anxiety and Depression support group that she felt like she turned a corner.

“The real benefit of having this type of support group is that it gives moms an opportunity to share their struggles with each other, and, as a result, it lets them know they are not alone,” Kristy said.

Ashley says she basically unloaded at the support group, and Kristy was a big part of helping her feel comfortable. She was encouraged to share her entire story at her first session— everything from before having kids to her current situation. Hearing she wasn’t alone was a huge help in overcoming postpartum depression. Before the support group, Ashley remembers thinking that no one really understood what she was going through.

“Moms are always told that everyone gets the baby blues and that it’s normal,” Ashley said. “Being able to connect as two moms and speak with someone on a level playing field was so great. I can’t speak highly enough about this support group.”

Having gone through her personal journey, Ashley now wants to share the simple, yet powerful, phrase with other moms that helped her so much—you’re not alone.